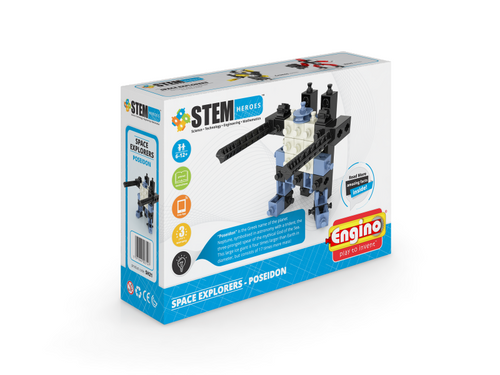 “Poseidon” is the Greek name of the planet Neptune, symbolised in astronomy with a trident, the three-pronged spear of the mythical God of the Sea. This large ice giant is four times larger than Earth in diameter, but consists of 17 times more mass!

The new STEM Heroes series introduces children into the world of STEM disciplines (Science – Technology – Engineering and Mathematics) through a completely new and playful approach! Boys and girls can construct one exciting model from each of the small sets, while also learning interesting facts about each theme, presented in the included leaflet and the free app for Android and iOS tablets. The models derive from a variety of scientific themes such as Aviation, Space Exploration, Animal Kingdom and Speedster Vehicles. Each theme consists of three starter sets which can be combined to create a larger model. These can be combined even further to construct amazing mega-builds! 3D interactive instructions for the included and the combination models are available through the interactive 3D KidCAD app for smart devices.