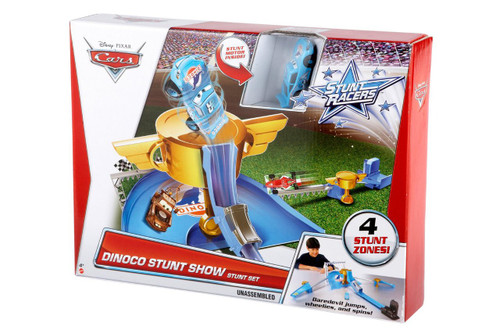 Cars Stunt Racers Dinoco Stunt Show Stunt Set
Dinoco keeps things moving in DisneyoPixar Cars, providing fuel for characters and sponsoring races like the iconic Piston Cup. Now, it's sponsoring the world stunt show championships to identify who is the most extreme. This set features four stunt areas for four times the action-even the winner's circle is a platform for the daring! A kid-powered crank-up launcher can be attached to any of the three tracks to start a stunt. Just load a Stunt Racers vehicle, crank the handle and push the button. The side tracks send Stunt Racers in the performance area on two wheels. A third track sends cars up the incline to jump into the winner's circle-if the character has the skills, and the luck! Show-offs may balance on their two rear wheels for a spectacular stunt finish! Set showcases four unique balancing platforms, one over the top of the Stunt Show! Kids can compete against each other or see which character can execute the longest head or tail spin! Includes 1 Stunt Racer Dinoco Lightning vehicle.