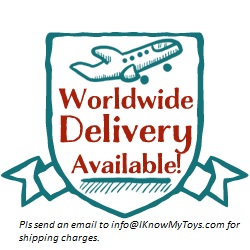 – The LEGO® name is made from the first two letters of the Danish words LEG GODT, meaning “play well”.

– The LEGO Group patented the LEGO brick with the familiar tubes inside and studs on top on 28 January 1958. All 2 x 4 LEGO bricks manufactured since have been produced to the exact same measurements as this patent.

– LEGO DUPLO bricks are eight times the size of original LEGO bricks – yet they both connect together.

– On average, every person on the earth owns 86 LEGO bricks!

– The LEGO Group is one of the world’s largest tyre manufacturers.

– Laid end to end, the number of LEGO bricks sold in 2012 would stretch round the world more than 18 times.

– To reach the moon you would need to build a column of around 40 billion LEGO bricks.

– The first minifigure was produced in 1978. Since then more than 4 billion have been made – making it the world’s largest population group!

– Each minifigure is exactly four bricks high without a hat.

– The first version of LEGO MINDSTORMS was launched in 1998 based on a collaboration between the LEGO Group and MIT (Massachusetts Insititute of Technology), USA. Two further versions have been released, one in 2006 and the latest in 2013.