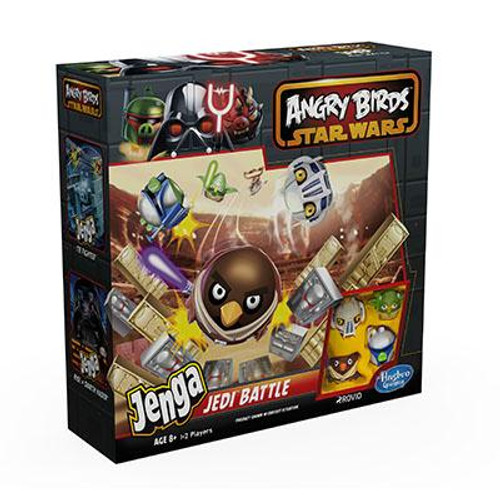 The Battle Droids and Jango Fett are on the rampage, and it's up to you to take them down in the Jedi Battle Game! Set up the battlefield with the Battle Droid and Geonosis blocks and the Super Battle Droid block halves. Then try to knock over your Jango Fett pig with high-flying Jedi bird shots from the Republic Attack Gunship double-wide slingshot launcher! Take turns launching your Mace Windu and Yoda birds at your General Grievous and Jango Fett pigs, or play solo. Either way, the one who knocks Jango Fett and his Battle Droid allies down with the fewest shots is the winner. Blast those Star Wars pigs for the win in the Jedi Battle Game!

Product Features:
· Launch high-flying birds at your Jenga stack of blocks and pig figures in the Jedi Battle Game
· The one who knocks the Jango Fett and Battle Droids over wins
· The Republic Attack Gunship launcher fires your figures
· Mace Windu, Yoda and Jango Fett figures are exclusive to this game
· Includes General Grievous pig figure

Jenga is a registered trademark of Pokonobe Associates.
Star Wars products are produced by Hasbro under license from Lucasfilm Ltd. Hasbro and all related terms are trademarks of Hasbro.