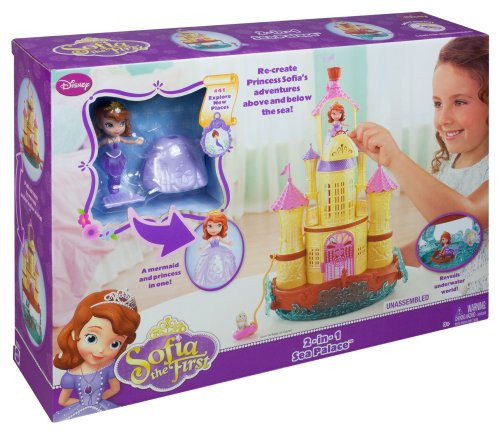 When Princess Sofia goes on vacation with her family to their floating palace, she encounters adventure, enchantment, and fun above and below the water. Girls can re-create their favorite scenes from the Disney Junior series with this colorful two-in-one playset that takes girls from aboard the “floating” palace to under the sea - all neatly on a tabletop (or other flat surface). Simply lift up the “floating” palace to reveal an underwater mermaid cove.

Palace For A Princess

In the vacation palace, three levels mean multiple ways to play. Enter through the pretty pink doors into the dining room. Princess Sofia (included) can dine with her family (sold separately) on the middle level or enjoy the ocean breeze on deck. A pink table and two chairs are perfect for royal teatime. Then she can journey up the stairs to the very top level and steer the ship from the captain's wheel. But that's just the beginning!

Princess Sofia can also embark on mermaid adventures - just like in the beloved Disney Junior series! The underwater cove is designed in translucent blue with detailed waves for a sea-sational effect. Take Princess Sofia down the slide for a grand entrance into the “underwater” mermaid cove, where she can sit and spin on the upside-down captain’s wheel, or flip up the seashell throne to visit with her mermaid friend Oona. A life preserver off to the side allows Clover the Rabbit (figure sold separately) to “hang” out too.

Play Happily Ever After!

Princess Sofia small doll is included for play right out of the box - and doubles the fun with a fantastic twist! Remove her princess skirt to reveal a magnificent mermaid tail, also in her signature purple. Girls will love re-living her magical transformation from princess to mermaid - and back - over and over. The doll also works with the Magical Talking Castle (sold separately), unlocking phrases for interactive play. Collect other Princess Sofia dolls and accessories (sold separately) to expand the storytelling possibilities.