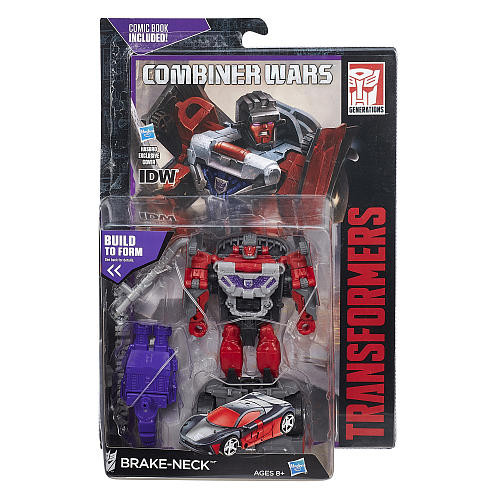 The Transformers battle doesn't get any bigger than this! Transformers Generations Combiner Wars figures unite to form giant super robots. Build the most powerful Combiner robots from Transformers lore, including characters like Superion and Menasor, or come up with a different combination! This special edition Brake-Neck figure can become part of a G1-inspired Menasor Combiner build, re-imagined as part of the Combiner Wars saga. Collect all 6 Stunticons figures (each sold separately) to build a Menasor figure.

Brake-Neck has no respect for the rules of the road, or anything on it. Autobot or Decepticon - it doesn't matter. Any bot that gets in his way is in line for repairs once Brake-Neck is done with them. Even the unpredictable Stunticons see him as an out-of-control wild rider. He combines with his fellow Stunticons to form Menasor. Motormaster forms the torso, Decepticon Dragstrip and Brake-Neck form the arms, Breakdown and Dead End form the legs, and Decepticon Blackjack becomes Combiner armor. Collect all 6 Stunticons figures to build a giant Menasor Combiner. (Figures are each sold separately.) Add this Brake-Neck figure to a Combiner Wars collection to create the full G1-inspired Stunticons team and Menasor Combiner build. The Combiner Wars universal connection system makes this Brake-Neck figure compatible with Voyager Class Combiner Wars figures, so there are numerous combinations that can be created. Menasor 2 of 5.

This Brake-Neck figure changes from robot to vehicle and back in 11 steps and, with a sword accessory, comes ready for battle. It also comes with a collectible Combiner Wars comic book featuring a Hasbro-exclusive Brake-Neck cover, specially created character content, and a look inside the Transformers design desk.

Transformers and all related characters are trademarks of Hasbro.